I’ve always had a crush on J.M.W. Turner’s amazing light-filled paintings, and so you can imagine my thrill when I spotted posters of an ongoing Turner exhibit in Paris that popped up all over the city. Truth be told, the posters, showing a glimpse of what Turner is most famous for – his slightly abstracted, elegies to light — were a little misleading, since they preyed on a trick that even we Huffington’s have been tempted to do when advertising a show, but shied away from … namely showing a close up of a portion of a painting rather than the entire painting. And, if you’re expecting a major retrospective of this artist’s incredible work, especially his later, more famous and definitely more ground breaking work, you may be disappointed.

But put those thoughts aside and if you are in Paris this summer, you must run, not walk, to this show! Held in one of my favorite buildings in Paris, the venerable Grand Palais, this jewel of an exhibit is an art history buff’s dream. 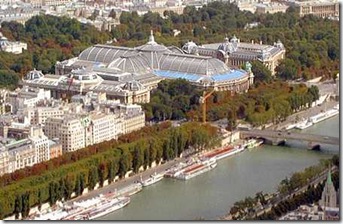 An aerial view and close-up of the Grand Palais 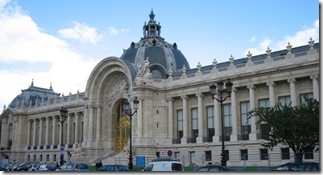 Rather than a broad retrospective, it takes a very specific point of view and focuses on Turner’s influences, including surprising artists that he downright copied. The exhibit shows the original painting next to Turner’s own interpretation and it’s absolutely fascinating. Some of the comparisons are so similar that they reminded me of the children’s game, “Spot the difference” between two paintings. (Note that we do not have access to the actual paintings in the exhibit, so we can’t do the comparison justice as the exhibit does.)

As a gallery owner, I was fascinated and bemused by Turner’s influences. There is no doubt that by copying the greats, including the princes of classical landscape painting, Lorrain and Poussin, or the master of light himself, Rembrandt, Turner was able to evolve eventually in to his own style using some of the principles of his classical training and stretching them so far that eventually his work took on a surrealist or abstract form.

And because of this, he was way ahead of his time, influencing in turn a whole generation of artists, from Manet to Matisse. But I guess that when I think of Turner, I think of his later work and never consider his classical landscapes. So I was properly fascinated by his early work and by its similarity to the masters whom he so clearly worshiped.

In the art world, we run into this a lot, where we try to draw the line between influence and copying. Most classically trained artists learn by copying others. And even some great grown up artists will take influence to an extreme. Didn’t Picasso and Braque copy each other so much that Picasso once said he couldn’t tell their paintings apart? 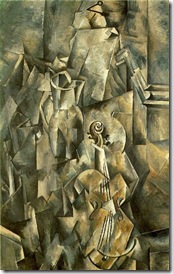 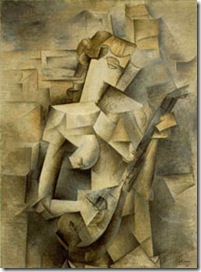 Of course if you’re copying openly and crediting the source, that is one thing. If you’re merely stealing someone else’s originality and trying to take credit for it, that’s another. In the case of Turner, what was so interesting is to what degree he copied the greats and then to what a greater degree, he took those influences and pushed them to their limits.

One of my favorite paintings in the exhibit (but interestingly not one that we would ever carry at the gallery – snow scenes don’t fly in the South!), was of an avalanche in Switzerland. 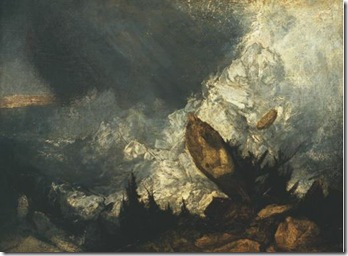 First off, it’s painted on a diagonal, and the uncomfortable perspective actually reinforces the disruptive and forceful feeling of the avalanche (note, Japanese influence). Secondly, the strong foreground pulls you in to the painting immediately, and makes you feel like you’re in the storm. Thirdly, his use of palette knife makes the texture much rougher and gives the hard edges a violent streak. And finally, in classic Turner tour de force, it’s painted without realism which makes it actually feel more real. In other words, this painting is all about feeling rather than being descriptive in a representational way. Oh Mr. Turner – so ahead of your time!

I had to laugh at myself a few times during the exhibit. There were some paintings that were clearly influenced by others where I thought Turner’s interpretation was much less successful than his predecessors. There he was trying to paint Venice like Canaletto, but Canaletto’s palette and use of light was subtler and more beautiful. 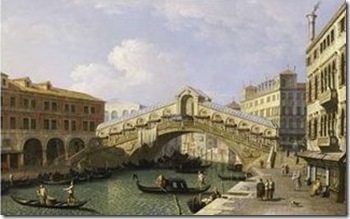 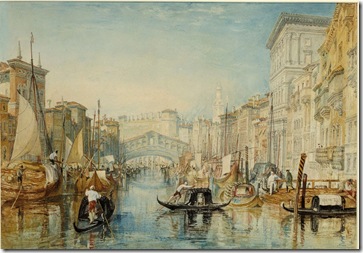 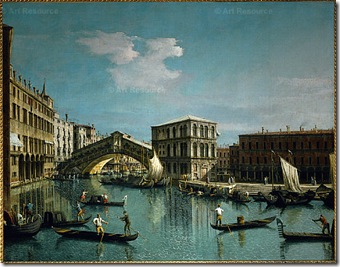 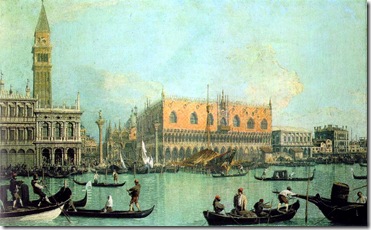 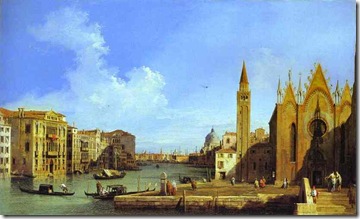 I know our artists will appreciate it when I say that Meg and I would have gently turned a few paintings down, had Turner brought them to our gallery. “Go softer on the blues,” we would say, “and go with gold to capture the luminescence of the sky.” It seems that even in a world class museum exhibit, I can’t help myself from being critical. 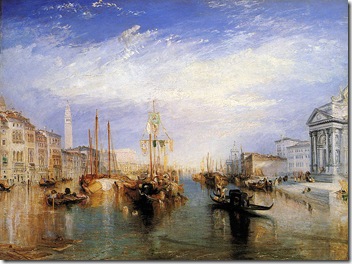 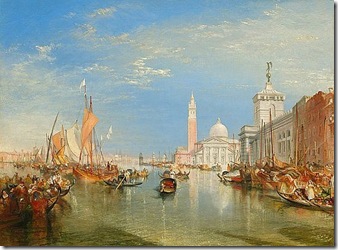 This is a jewel of an exhibit. Brilliantly curated, extremely well documented, perfect in length and broadly fascinating as it features incredible paintings by Turner and so many other masters as well. If you’re just even thinking of going to Paris this summer, this is an exhibit you won’t want to miss.

If you can’t make it to Paris, don’t despair! Our own wonderful artist Doug Foltz encompasses many Turner-esque qualities with his lovely diffusion of light and softly abstracted landscapes. A solo show for Doug is opening at our gallery on Thursday, May 6. Stop by the gallery between 6 and 8 p.m. to enjoy light refreshments and a comprehensive overview of Doug’s body of work. 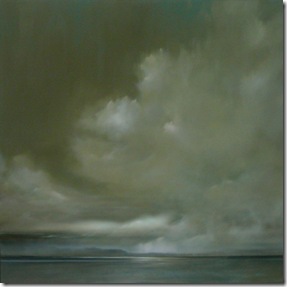 P.S. – Congratulations to Gramercy on the debut of their new online store! Now everyone near and far can get their “fine linens fix” from this little shop of delights. Be sure to check out their blog too!